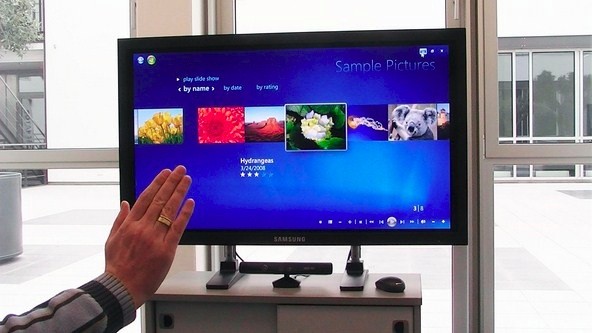 Some of you might remember when we covered the Gmail Motion a few days ago. I was told that Gmail Motion was essentially a big joke for April Fool’s Day, and that there isn’t a system where you can send emails by doing a “slapping a stamp” hand motion.
I think it is interesting that on the Gmail Motion video, it describes the keyboard and mouse as “outdated technology”. I suppose that if we are looking at the gesture-based technology of Minority Report as present instead of futuristic, then yes, the keyboard and mouse should be the equivalent of five-and-a-quarter inch disks.
Evoluce has figured out how to combine the Kinect for gesture-based computing on Windows 7. I believe that it comes in handy for the Media Center and other programs, especially for Microsoft Office and PowerPoint. There is a video of it after the jump.
I don’t really see a future where we sit in front of our desktops or laptops and make sign language in front of it all the time. However, I do see a future that combines keyboard, mouse, and a few select gestures. I think we have a long way to go before we can do the Tom Cruise, but at least we’ll be without the Minority Report gloves.
You should be able to get this particular software from Evoluce for about $30, without all the hardware.