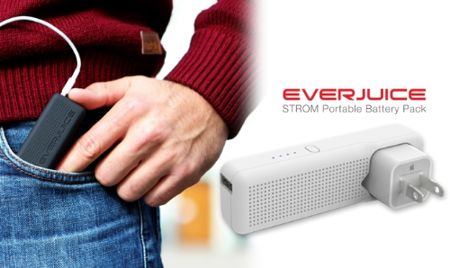 The iPhone from Apple is an extremely formidable device, to say the least. It has its fair number of apps over the years that has even spawned the saying, “There’s an app for that.” Well, one thing about having so many apps is this – if you happen to be an extremely heavy user, then you would most probably see the iPhone’s battery drain relatively fast. There are power banks in the market to “combat” such a situation, but here is a slightly different solution that you might fancy. I am referring to the Everjuice STROM, which is an iPhone battery pack that does not take the conventional route since it will slot into your iPhone wall charger, and at the same time, let you juice up your iPhone, now how about that?

The Everjuice STROM will be different from the other portable battery packs in the market, since you can juice your iPhone when it is still left plugged into the outlet, which in turn would do its bit to help you save both time and effort, and the same time ensuring that your favorite communications device will remain charged and ready to use. All that you need to do is to snap it onto your Apple wall charger (US, EU & UK models), and the Everjuice STROM will charge as you charge your iPhone, meaning you would never end up in a situation where it is a choice between the two.

Just like how we should not judge a book by its cover, the relatively diminutive size of the Everjuice STROM should not be seen as a negative. In fact, it packs a whole lot of extra battery life by offering up to 160% extra power to your iPhone. Having 2.1 amps power output, the Everjuice STROM is specially optimized to meet the increased charging power demand of new iPhones. It is not only a snap to use, it is also eco-friendly thanks to the use of advanced shut-off circuitry. In other words, the moment it is fully charged, it will not be part of the “vampiric power” conspiracy even when left plugged into the outlet. Even better news is, the STROM will play nice with Androids and any other USB-charged devices as well.

Do take note that this is an Indiegogo project, so it will need to obtain the necessary amount of funds before it makes the jump to the corporeal world.