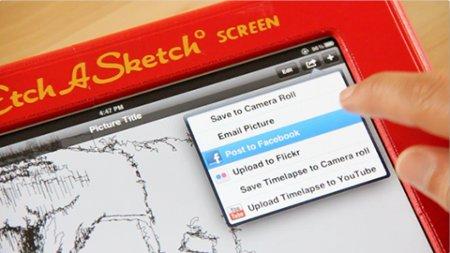 I am quite sure that when you first played Draw Something on the iPad, you must have figured out that the iPad, if it had a properly programmed app, would also be able to double up as some form of Etch A Sketch, a toy that gave you many hours of fond memories as a child. Well, I guess those prayers have been answered, as a Kickstarter project that is looking for the right amount of funding has just announced Etcher – an app for the iPad that has every intention of delivering the Etch A Sketch experience right on the iPad itself. This is more like it – the convergence of the old and the new, merging new technologies with tried, tested and successful ideas.

Etcher actually functions as an iPad case, where the 9.75″ tablet will be able to fit nicely within the Etcher itself, ensuring that your recently purchased iPad does not experience any unwanted knocks or scratches. Not only that, it will also make that startling transformation of turning it into a fully-functioning version of the classic child’s toy Etch A Sketch, which was first released to the market in 1960 and has more or less been something that kids have played with over the decades, although its popularity has somewhat been ebbing into the twilight over the years.
Etcher functions in pretty much the same manner as that of the original Etch A Sketch, as it has the very same plastic knobs in order to create similar patterns on the screen. The only difference? When you use the Etcher, it will be a digital image instead of a physical image. Shaking will delete what you see on the screen, so I think it might not be too advisable to play this while you are flying or riding on some bumpy terrain. The other thing is, you need not snap a photo of what you have drawn for posterity, as the image can be saved to the iPad and shared online later on.
Source