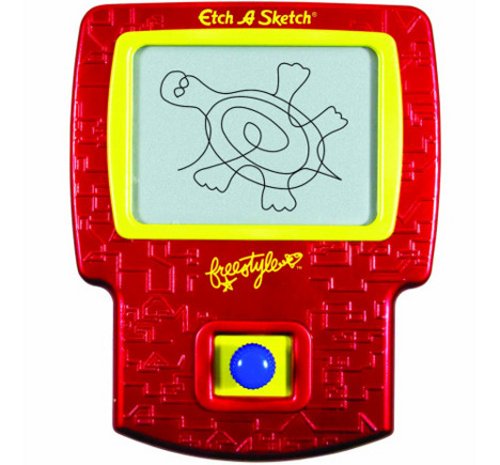 Those of you that thought some toys were far too sacred and classic to be updated should probably look away, because you’re probably not going to like this one.  Instead of your kids playing with the same old version of Etch A Sketch that’s been around for years, they can have a fresh new version.  A version that basically takes any and all challenge out of drawing pictures on the screen.

It used to be you had to work the two knobs and you would get a sloppy simplistic picture.  You had to work at it to get anything that looked remotely decent.  Now kids can have the Freestyle version that instead of having two knobs, it has one.  This one knob swivels around a full 360 degrees.  That’ll allow kids to effortlessly draw curved lines.  At least they still have to shake the thing to get rid of the picture.  You can purchase one for $14.99.