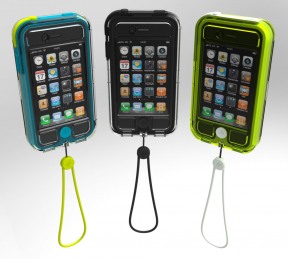 By now, you know about Mr. Jobs stepping down as CEO of Apple. Perhaps the new CEO, Tim Cook, might want to look into these EscapeCapsules.
Okay, that sounded weird. I’m not implying that Mr. Cook needs to escape in any way from his new position at Apple. The EscapeCapsule isn’t something that one uses to quickly leave, but it is something to protect the iPhone 4. Right now, Catalyst has put their Escape Capsule on Kickstarter, but it really should be an official Apple accessory as it is downright useful for protecting an Apple asset.
What you are seeing here is an exo-skeleton made from high-impact clear polycarbonate, which can protect against the elements, including water. It also can protect against impacts like scratches, and while I don’t have the exact specs, it will go underwater.
The EscapeCapsule protects the hardware buttons, as well as the touchscreen. It also comes in a variety of colors and has glow-in-the-dark rubber bumper and lanyard.
I’ve seen a lot of iPhone protecting accessories before, and this one looks very, very good. If you pledge $50, you can pre-order the EscapeCapsule now. Catalyst intends to sell the case for $70 when it hits the market, so that is a pretty good deal.
Source