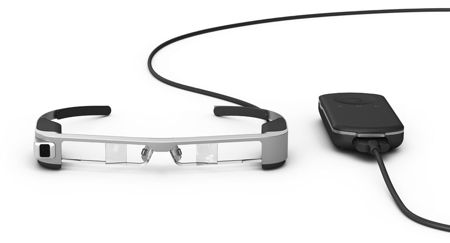 Just when you thought that heads-up displays for the human being, in the form of the wearable technology that is known as smart glasses is something that is about to catch on in a big way, the industry does not move within such expectations, where even tech giants like Google will need to reevaluate their Google Glass program and scrap it. Epson has had their foray into this segment as well with their Moverio a few years back, and at the recently concluded Mobile World Congress in Barcelona, Spain, we did hear of Epson making an announcement of its third generation of Moverio smart glasses – the Moverio BT-300, which will boast of Epson’s breakthrough silicon-based OLED (organic light emitting diode) digital display technology that enables truly transparent mobile augmented reality (AR) experiences for business and consumers alike.

The Epson Moverio BT-300 happens to be the lightest binocular see-through smart glasses announced to date, where it is 20% lighter compared to its predecessor, the Moverio BT-200, and that itself sets a new standard for augmented reality smart eyewear. The glasses will be powered by a quad core Intel Atom X5 processor and Android 5.1 Lollipop, which enables efficient rendering of complex 3D experiences.

There is also an upgraded 5 megapixel front-facing camera and on-board sensors that enable the Moverio BT-300 to more precisely determine the location of objects in the real world, while the Si-OLED projection system will seamlessly render and lock 3D content to these objects, doing away with any kind of display background or edges in the field of view.

Do expect the Epson Moverio BT-300 to be made available to the masses some time later this year, if you are interested in a device that takes a major leap forward in mobile AR smart eyewear, while arriving in a comfortable and lightweight form factor whilst boasting of an amazing new display engine without a price that is too far out of reach. While exact pricing details have not been revealed, it has been said to be priced at a “price comparable to smartphones.”