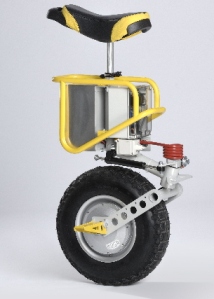 In July of 2008, we covered the UnoCycle, a one-wheeled Segway. One year later, it would appear that the UnoCycle isn’t exactly all over the streets. (Then again, neither is the Segway, really.)

The eniCycle is much thinner and practical (no streamlined frame) than the Unocycle. Designed by Slovenian inventor Aleksander Polutnik, it has several gyroscopes that manage to keep the thing on one wheel, one hundred percent of the time.

Unless the driver crashes it, but accidents should be a rarity once the driver has mastered it. In fact, the inventor says that a person can easily learn how to drive the eniCycle in about fifteen to thirty minutes. This video after the jump shows Ortiz Deley of the “The Gadget Show” learning to ride it in that time frame.

The battery life is good for about for about three hours, and the top speed is at ten miles per hour. The video shows that it is good for “eni-time, eni-where”, and Mr. Deley does make it look like a lot of fun.

It would appear that only two of these eni-Cycles have been made for now, but there is no reason to believe that more will be made once the inventor gets enough funding. Hopefully, they will be cheaper than the average Segway.