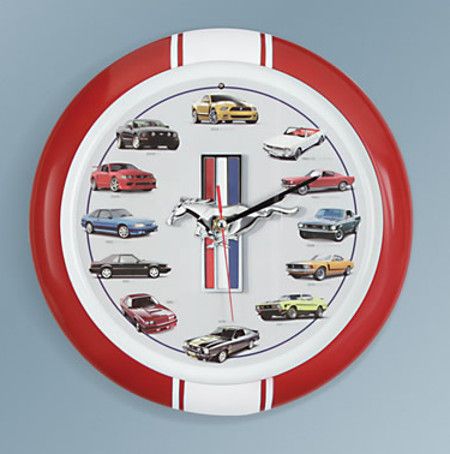 With so many different clocks being out there in the market at the moment – and for sure, the situation will still be the same for the next generation, just which particular model should you choose from in order to tell the time? After all, there is a clock for every budget, and if you would like to go all old school, a grandfather clock would definitely look grand in your living room. Having said that, petrolheads will most probably fall in love with the $39.95 Engine Growling Mustang Clock, where this particular wall clock would pay homage to America’s definitive muscle car since 1964 – the Ford Mustang.

Instead of having numbers around to tell the time, this 13″ clock face will feature a dozen legendary models that range from the inaugural “1964 1/2” convertible coupe to the modern Boss 305. Each hour that happens will hear the clock announce it with authentic recordings of each model’s signature engine revving up, and that would include the growl of the 1968 GT Fastback as well as the burly sounds of the 1976 Cobra II. There will be light sensors that deactivate the sounds whenever the room is dark, so that everyone can sleep peacefully in the wee hours of the morning. The Engine Growling Mustang Clock will run not on gas, but a trio of AA batteries.