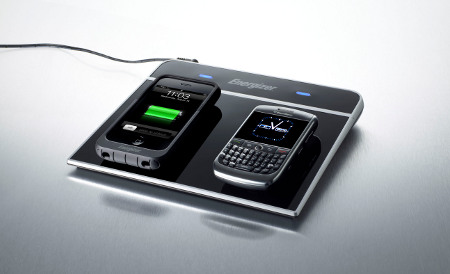 Mention alkaline batteries and chances are you will have both Energizer as well as Duracell names come into mind. Well, this time we will concentrate on the former, as Energizer has just unveiled a spanking new inductive charger for the mass market where it will be built using Qi technology, which is actually a new universal charging standard that was developed by the Wireless Power Consortium (WPC). The device will be known as the Energizer Inductive Charger, where it supposedly makes charging devices a whole lot easier as it will help you do away with cords and clutter.

Touted to be one of the most compelling new developments in charging technology to date, Qi (pronounced chee) will bring wireless freedom when it comes to charging a plethora of devices including smartphones, MP3 players, cameras – basically any device that requires 5 Watts or less juice on a single charging station, without paying any regard to the type of manufacturer. This will be the first generation of the Energizer Inductive Charger, and it was specially designed to conveniently charge up to three devices simultaneously. Two large inductive charging zones that will not require any locking of the device into a precise position are available, while a USB port is also there for you to juice up another device including a phone, headset, MP3 player, camera or GPS unit. With a couple of LED charge lights, they will indicate whether a particular device is charging or not.

Each Energizer Inductive Charger will be introduced with a Qi Sleeve for the iPhone 3GS/3G alongside a one-time replacement Qi Door for the BlackBerry Curve 8900, letting you get started right out of the box – for owners of said devices, of course. One can only expect that as this catches on, more and more devices in the future will come with Qi technology built-in right away. The Energizer Inductive Charger will hit the retail market from next month onwards, where it will be priced at $89. As for the removable Qi sleeve for the iPhone 3GS/3G and the Qi door for the BlackBerry Curve 8900, those can be purchased separately for $34.99 a pop.