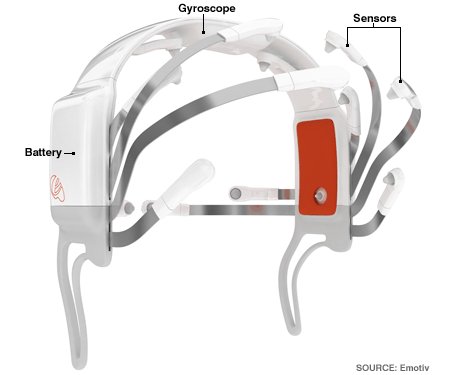 Remember the Emotiv headset which we covered last year? That was a unique mind-controller that enabled wearers to actually control the actions on the screen simply by using the power of the mind, but one year ago, the prototype could not do as much as what was displayed at GDC this year. This updated Emotiv headset is now even more capable of interpreting the interaction of neurons in the brain, picking up electrical activity from the brain while sending signals to a computer sans wires. This makes it a snap for users to manipulate a game (imagine making headshots all the time with perfect accuracy in Counter Strike) and a virtual environment naturally and intuitively.

According to Tan Le, president of US/Australian firm Emotiv, “Emotiv is a neuro-engineering company and we’ve created a brain computer interface that reads electrical impulses in the brain and translates them into commands that a video game can accept and control the game dynamically.” This is the first headset that doesn’t require a large net of electrodes, or a technician to calibrate or operate it and does require gel on the scalp. It also doesn’t cost tens of thousands of dollars.”

In addition to reading your actions, it can also read emotions of players and translating that to folks around you in the virtual world. For example, if you gleefully laugh at an opponent after finishing him/her off, your virtual buddy will actually give you a good verbal rubdown for being callous. Virtual nagging for $299? Sounds pretty interesting. At press time, the Emotiv can detect over 30 different expressions, emotions and actions.

Features of the Emotiv include :-

Check out the OLogic for another mind-control robot.