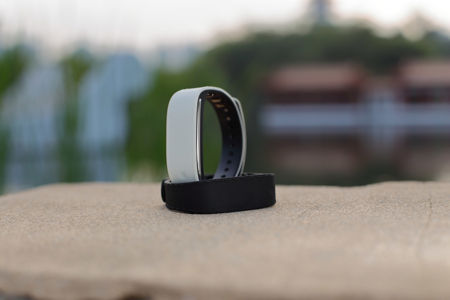 Wearable technology has certainly grown by many leaps and bounds over the years, as technology continues to evolve and show us how things start to get better and better. EmoBridge has shown off their new sensmi smart wristband, which is touted to be the first smart wristband of its kind in the world that will be able to accurately track and analyze daily stress levels as well as sleep patterns, so that people are able to live out a more well-balanced and peaceful life.

The sensmi smart wristband will come built with patented, hospital-grade GSR-PRO bio-sensing technology which can then track brainwave activity via Galvanic Skin Response (GSR) and a proprietary algorithm that disperses data which is easily understandable. This in return allows users to gain access to straightforward results and easy-to-follow instructions on how to confront lifestyle stressors.

Being ultra-thin in its form factor, this water-resistant wearable will boast of a long battery life and with its companion iOS and Android app, it will be able to accurately measures and effectively manage the user’s stress levels and report on how daily activities and sleep patterns are able to affect their mental state. Scientific research has also proven that when individuals get excited, nervous or stressed, a burst of signals from the brain fire nerves on their skin that lead to a spontaneous fluctuation of skin conductance, which is known as Galvanic Skin Response (GSR).

sensmi created GSR-PRO, which is a sophisticated algorithm that functions as a doctor providing biofeedback therapy as well as data to users in a way that’s simple to understand, but do not be led into thinking that this is a replacement for an actual doctor. Whatever the results are, a computer has not quite reached the level of a well trained and professional medical doctor to know what steps you are to take next if you are extremely stressed.