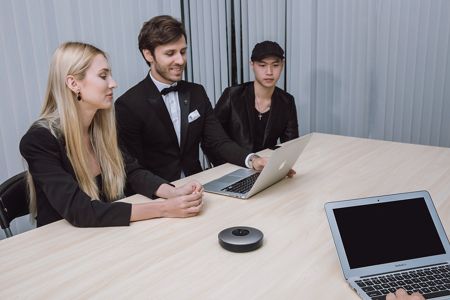 Speakerphones are not something that you would go shopping for frequently. In fact, not too many people would go through the trouble trying to search for one to be used at home. However, when it comes to the office environment, speakerphones do come in handy for one particular reason: conference calls. With the availability of high speed internet in many offices worldwide these days, it makes perfect sense for speakerphones to be used in conference calls, letting different teams from various places to converge together and carry out a conversation without having to be gathered physically in one place. Shenzhen eMeet Technology Co. Ltd. is a Chinese tech company that develops and markets high-tech conferencing devices, and they have recently announced the availability of the world’s first high-performance Bluetooth portable speakerphone which will integrate the functionality of VoiceIA algorithm background noise and echo suppression, AI algorithm sound capture and automatic volume adjustment, a quartet of high sensitive MEMS digital microphones array, as well as Bluetooth 4.2 technology (this is also what’s found in great Bluetooth transmitters) into a compact and portable device that is known as the OfficeCore M2 Conference Speakerphone.

The OfficeCore M2 Conference Speakerphone is touted to be an extremely sophisticated device, arriving in the form of a portable Bluetooth speakerphone. The VoiceIA patent algorithm that is used is based on AI technology DNN (Deep Neural Network), allowing it to filter human voices while suppressing background noises effectively, even though there is a noisy environment all around, delivering natural two-way conversations.

The eMeet M2 will come with 4 high sensitive MEMS digital omnidirectional microphones array, enabling it to pick up sound from any angle while being able to accurately identify human voice positions so that it will capture only vocal sound. It is capable of doing so at a distance of up to 33 feet away with a dozen people in one room. Boasting of multipoint connection, it paves the way for infinite expandability as it can be linked together through wire for as many M2 speakerphones as required. Other plug-and-play and multiple connection solutions include connectivity with virtually any other smart devices as well as seamless integrated with all communication platforms over Bluetooth, the AUX port, or via USB. Powered by a 2500mAh Li-ion battery, it offers up 12 hours of continuous talk-time on a full charge, taking a mere 1.5 hours to recharge from empty.