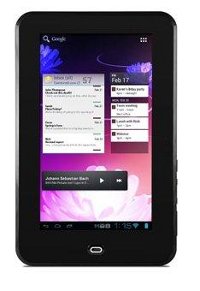 Just when you thought that $89.99 for a tablet device which runs on Android 4.0 Ice Cream Sandwich is pretty cheap, not to mention highly affordable, along comes a company like Ematic who will continue to push the bar further, although some might say that it drops the bar instead. After all, the $89.99 price point has just experienced yet another drop thanks to Ematic’s efforts with the eGlide 4 which will retail for $10 cheaper – that means it is going for a mere $79.99. I wonder what is the absolute minimum price point for Android-powered tablets in the future even as the manufacturing process becomes more efficient?
Well, the Ematic eGlide 4 might be dirt cheap, but does that mean Ematic has decided to sacrifice quality and performance in the process? This is definitely something that we will need to look into, especially when you consider the fact that one’s dollar bill can only stretch so far in these economically challenging times. Let us take a closer and detailed look at the eGlide 4 in the extended post.

Just like the Matrix One Android 4.0 Ice Cream Sandwich tablet, so too, will the Ematic eGlide 4 come with a 7″ touchscreen display that makes it easy for you to carry it around on a single hand without having it lead you to experience cramps later on. The processor underneath the hood is slower than what you will find in many of the higher end smartphones of today though, as we are looking at just 1GHz of clock speed, but if you are going to use the eGlide 4 for basic functions like checking your email, replying them, updating your Facebook and Twitter accounts, while typing out a document on Google Docs, it might just be enough to pass by.
Forget about using this as a dedicated portable gaming machine, the hardware certainly does not seem capable of living up to expectations. As for storage space, you will get 4GB of internal memory that is accompanied by 512MB RAM, while you can make further use of the provided 5GB of cloud storage with each purchase. Just in case all of that is not enough, make full use of the microSD memory card slot that will help bump up the final memory count by another 32GB.
The eGlide 4 has an edge for students as it will feature a built-in voice recorder, allowing one to snooze at the back row of class while the eGlide does the job of recording down whatever your lecturer is saying. An Office Suite application has also been thrown into the mix for opening up essential Word, PowerPoint, and Excel files that are widely used by just about anyone. Any takers?
Product Page