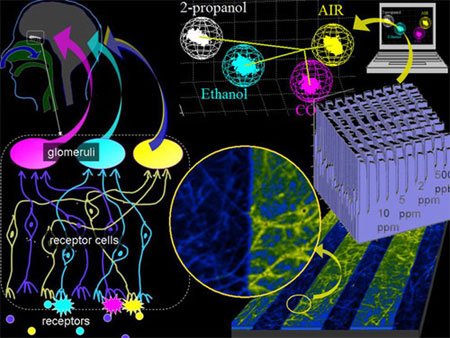 Most folks would probably dismiss a weather monitor with built-in clock function as a “meh” device, but this one from Oregon Scientific aims to impress you with more than just its functions. It boasts a projection clock that will react constantly to forecasted weather from 12 to 24 hours in advance, changing its display color accordingly (red, light blue, blue, orange and green), depending on the upcoming weather condition. Dubbed the BAR339P, this device helps you plan your day ahead with a range of outdoor conditions including sunny, partly cloudy, cloudy, rainy and snowing using a remote sensor with a range of up to 100 feet (30m).

According to Kolmakov, an assistant professor in the physics department at Southern Illinois University at Carbondale, this work is an example of a successful and truly international collaboration between his group, Dr. Victor Sysoev (electronic noses specialist, Saratov State University, Russia) and group of Dr. Joachim Goschnick (developers of the commercial KAMINA e-nose system Forschungszentrum Karlsruhe, Germany). He mentions, “Basically, we took a very robust and successful electronic nose platform and instead of using the traditional thin-film sensing element we implemented completely new morphology of the sensing layer, which in our case, is composed out of the layer of tin oxide nanowires”.

This device is capable of achieving a certain degree of analogy with neurons, whereby the randomly distributed nanowires contact each other and form multiple percolation paths for signal transmission. The resistance of these percolating nanowires is a very sensitive function of the gas environment. Due to a stochastic difference of the percolating pattern between every two electrodes (the space between each couple of electrodes serves as a separate sensor), the sensor array of multi-electrodes produces a different response pattern to differing analytes. Similar to our brain, the processor attached to the e-nose conditions and analyzes the electrical signals coming from the sensor array and, using pattern recognition techniques, produces the image of the ‘odor’.

All I can do is wonder in amazement – when will bionic eyes and ears come next?