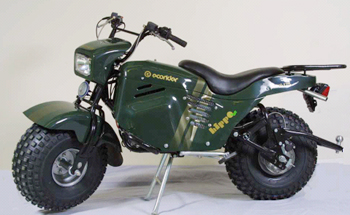 It is rare to see a motorcycle two-wheeled vehicle that runs on runs on diesel Agricultural/Forestry diesel, the EcoRider fits that profile and still adds another consumption fuel which is Petrol. If having a diesel powered vehicle is good to save some money, (worldwide gas prices are a becoming expensive everyday) it is even better if the fuel consumption is low which is the case with the EcoRider that can crack down 120 miles with only 1 gallon, that means 100km only using 2.8 Liters.

Like the name EcoRider indicates, the vehicle is EcoFriendly and one distinguishing quality is making less ground damage than someone traveling by foot, odd isn’t it? In terms of Carbon dioxide emission that is also minimal, being 83% less than an average four wheeled all-terrain vehicle.

The maximum speed is 25mph (40kph) so don’t think about going with it to the highway and using it like a normal motorcycle, the EcoRider applications stated on the official website confirm that it is suppose to be used on Nature Reserves, Foresty, Farming, Agriculture, Golf and Grounds care plus one or two other applications, it is classed as a light agricultural vehicle. It’s not road legal per se, but this can be achieved if you add a rear view mirror, a number plate, another modification that will make the top speed go up to 32mph (52kph) and other stuff.

Prices vary depending on the model, the petrol version costs $3,700 while the diesel engine version is a bit more expensive – $4,500.