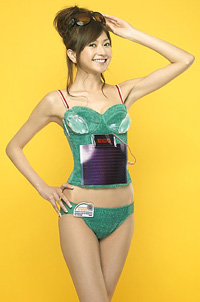 Lingerie can be used for a variety of tasks. It can improve a woman’s confidence in her body. It can spice things up in the bedroom. But one thing which lingerie isn’t particularly known for is promoting environmental awareness. At least, not yet.

The eco-friendly Solar Power Bra integrates a whole lot of green into one complete sexy package. Aptly colored with a green shade, the Solar Power Bra features a waist-mounted solar panel which powers a small, chest-mounted electronic billboard, or pretty much any other gadget you feel like modding onto the bra.

Not to be outdone in other eco-friendly categories, the bra even offers a pair of reusable drinking cups (no pun intended), which not only offers a way for the wearer to reduce the amount of aluminum cans and plastic bottles they use, but also adds to the woman’s (or man’s, if you’re into that sort of thing) bust size. These reusable containers can be hidden away in a special pocket on the bra’s cups.

The overall goal of the Solar Power Bra is to ignite a flame under environmental thought. If women were to actually wear such a contraption, you might have a few more scientists showing a new found interest in eco-friendly technology. Or at least some very happy eco-activists.

I mean, wouldn’t you take a sudden interest if your lady-friend were to strut into your room wearing something like this? I know I would. Now, if only I can convince my girlfriend to wear one of these. For strictly scientific reasons, of course.