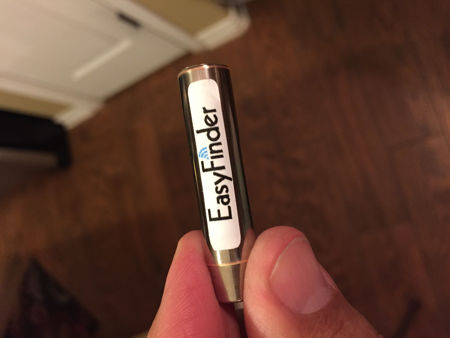 There are times when you wished that you had the kind of mental prowess to be able to keep track of where things are exactly. The thing is, we might end up being so occupied with all of the little details of life these days, that small stuff and tiny items do not matter all that much. Having said that, it is always nice to have a memory that does not forget such items, and keeping track of things too, is a way to exercise your mind. EasyFinder is a recently launched Indiegogo campaign, where it comes across as a patent-pending Bluetooth battery system which will be able to help you locate the slew of your remote and battery-powered devices.

In order to better explain just what the EasyFinder is, it happens to be a two-way Bluetooth battery that has been specially designed to hunt down your battery-operated devices via EasyFinder’s free mobile app. In addition, this two-way system will also enable the user to locate their very own smartphone by pressing the logo on the EasyFinder battery, just how easy can it get? This particularly breakthrough technology will also mark the very first device in the Bluetooth locator space that functions as a two-way locator.

Rick Tennyson, founder of EasyFinder, shared, “We were always losing the remote in the house, a problem I think a lot of people have. With a background in engineering, I decided develop this two-way system to be able to find any battery operated devices AND your smartphone, so you can find things fast. We are using Indiegogo to get this into mass production and into everyone hands quickly.”

Thanks to the wonders of Bluetooth connectivity, the EasyFinder will be able to remain connected via Bluetooth, so that users can look for their battery-operated devices and/or smartphones as long as it remains within a 70 feet range. In addition, there is Radar Screen Tracking that enables it to locate up to 10 battery-operated devices and your handsets. There is also the Sounded Alarm, where the EasyFinder app will activate a sounded alarm on the user’s smartphone, and it does take into account of doing so despite the device being on silent mode. Expect the EasyFinder to be available on Indiegogo for an early-bird price of $25 for a limited time only.