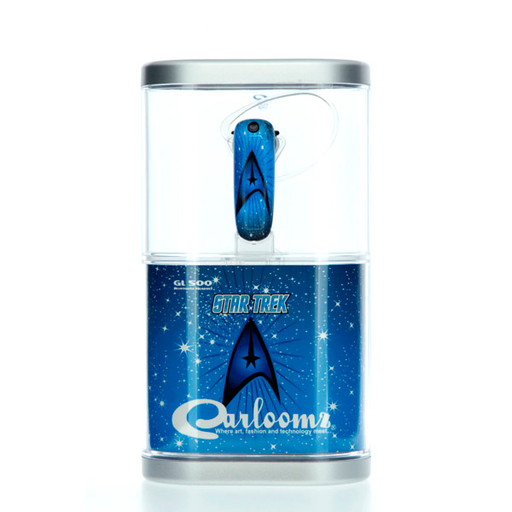 Whenever I write about a product related to a popular science-fiction franchise, I usually have a long list of jokes or puns that I can use.
For example, I could say “Live Long and Prosper” with this Star Trek Bluetooth headset, but that is actually the name of the model that you see here. I will go with the next choice as it is “logical” (think Mr. Spock) that someone would make a Bluetooth headset with a Star Trek logo.
After all, Star Trek is considered by some to be “Geek Mecca”, and this is an actual quote from Wil Wheaton, who played Wesley Crusher on Star Trek, The Next Generation. It just makes sense to put Star Trek on a piece of tech and expect sales from geeks who love both tech and Star Trek.
So how is the Bluetooth headset? It is really going where most Bluetooth headsets have gone before, with its one-button controls, USB recharging, 120 hour standby time, and Bluetooth v2.1+EDR. I got a chance to try it out, and it didn’t really stand out from other Bluetooth headsets that I have tried. This is not a negative review, as I am saying that it can do its job.
As someone who is somewhat a fan of Star Trek, I will have to say that Bluetooth headsets are not a representation of Star Trek, the original series. It was Captain James T. Kirk that introduced us to the world of cell phones with his flip-up communicator. I can only assume that those guys on the Next Generation were using a Bluetooth device that fits on their badges.
But I’m beginning to sound like the Comic-Book Guy from The Simpsons. I could geek out on Star Trek all day, and if you can do the same, feel free to head to the Earloomz site and lay down $30. Just to let you know, that is a Black Friday price, and I don’t know if it will be the same by the time this article posts. By the way, there are two other Star Trek models besides the one that you see here.