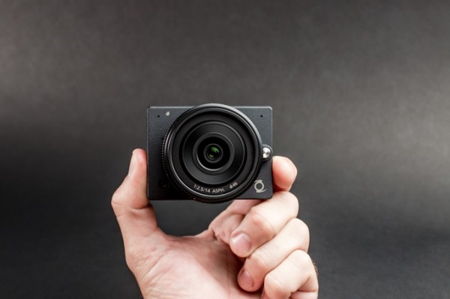 The E1 Camera happens to be the latest entrant into the world of 4K ultra-high definition (UHD) cameras, and thanks to the new digital imaging startup “Z”, the E1 Camera has now been launched as a project on Kickstarter. The E1 Camera itself will feature a micro four-thirds (MFT) sensor as well as an interchangeable lens system that is compatible with majority of the MFT lenses out there, not to mention having one of the most advanced autofocus systems that are in the market today.

Kickstarters was chosen to be the vehicle of choice in order to take pre-orders and introduce not only the brand, but also the product to consumers, in addition to picking up valuable market insight where this form-factor and future features are concerned. Upon completion of the Kickstarter campaign, the E1 (body only) will cost you $699, but if you would like to have a kit with a 14mm (f/2.5) lens, then that would cost you $999 a pop.

The E1 camera is very different from its competitors since it boasts of a unique interchangeable, Micro Four-Thirds lens mount, which can be adapted with the widest range of auto-focus (AF) lenses available from Olympus, Panasonic Lumix, Leica and Sigma, in addition to a range of existing manual-focus (MF) lenses. Compared to bulky DSLRs, this camera will let users travel around with their formidable collection of lenses in order to capture the highest-quality footage possible, changing the way consumers produce quality content and to share it later on.

The E1 will come along with Wi-Fi 802.11N, Bluetooth Low Energy (BLE), and an Ambarella A9 image processor. One can easily capture cinema-quality 4K (4096×2160) video at 24 frames per second or ultra-high definition video (3840×2160) at 30 frames per second with H.264 compression, while advanced 3D noise filters will make use of motion compensated temporal filtering (MCTF) technology in order to reduce noise and jitter. This paves the way for incredible low-light performance with the camera’s ability to shoot at up to 102,400 ISO while maintaining high image quality, up to 6400 ISO. Seems to be a pretty handy device to have around, as it packs more than its fair share of goodies for the budding shutterbug.