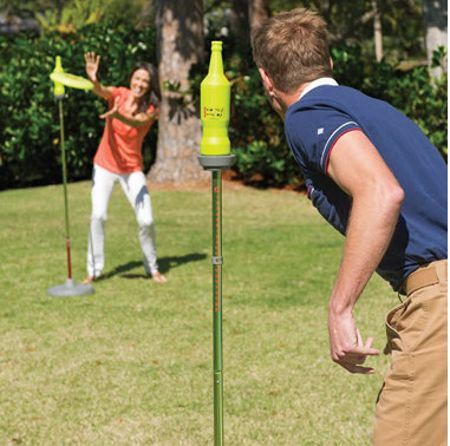 When was the last time that you engaged in a little bit of frisbee fun outdoors? Perhaps it has been way too long, and you also realized that it is about time you got up to get that body (with its joints) moving again. While you are unable to locate your favorite frisbee in and around the home, maybe getting something new and different might do the trick. The $79.95 Dueling Disc Battle does sound like a fun addition to any summer games or activities, and it might even make you feel as though you were in the world of Tron, save for the special and fancy effects.

The Dueling Disc Battle is a portable outdoor game that takes less than one minute to set up, and yet it is capable of challenging picnickers as well as tailgaters to a duel through a game of flying disc. You can set it up in double quick time across various surfaces, whether it is on a pavement, on grass, or even sand, as the lightweight game will comprise of a plastic disc and a pair of safe plastic bottles which will rest atop two weighted metal stands. Players, who happen to play one on one or in teams of two, will pick up points by toppling their opponent’s bottle with a toss of the disc, or should your opponent fail to catch a spinning disc or knocked bottle. It is a truly weatherproof set that can stand up to years of battles and spills of food or drink, and each purchase will also boast of an organized carrying case for easy transportation.