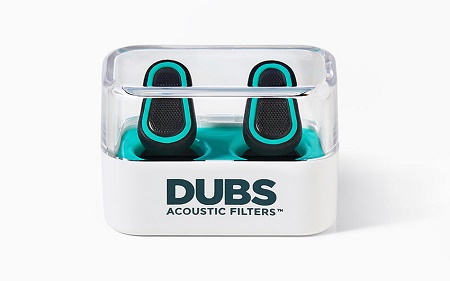 When you’ve had a long week, you want nothing more than to lay back and relax, without having anyone or anything interfere. While that’s not often possible, you do want to try and make the best of whatever situation you’re stuck with. If your weekend plans consist of you having to run seemingly endless errands, be on a plane, or be at the DMV for longer than you’d like, you’re going to run into some obnoxious people, guaranteed.

While the world is not full of terribly loud and annoying people, there are times where you would rather go on a rampage then have to listen to one more second of their pointless blabbing. We’ve all wished to be able to turn down the volume of the world around us, and it is a possibility. The Dubs are acoustic filters that you wear like earphones, but instead of playing music, they filter the sounds of the world around you.

These are not supposed to be stuffed into your ears, but rather sit snugly so you can comfortably ignore more of the outside world. Despite cutting down the sound, you’ll still be able to hear things without them being muffled. Made of stainless steel, ABS plastic, polymer foams, and silicone, this is meant to deal with the normal wear and tear you put most of your gear through. This comes in teal, blue, pink, and white, and will cost you $25 for one set.

Available for purchase on getdubs

1 thought on “Dubs – Finally, you can turn down the volume of noisy people”