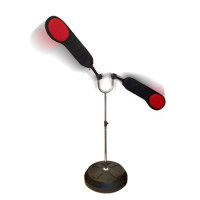 If you think you’re any good at the martial arts or you just want a fun and safe way to relieve stress, this gadget could be just the thing. The Dual Kick Spinner is a training tool which allows you to take realistic kicks at spinning targets.

It has two kicking targets on a poll which spin as you hit them. If you kick one target, it sets the other one spinning at you from the other direction, giving you quite a lot to think about and provide a lot of non-stop action.

It’s the perfect training partner as you don’t need to worry about hurting it. You can also practice as much as you want because it will never get tired and keep on coming back around.

It is filled with 50lbs of water or sand you shouldn’t be able to knock it down, and if you do it’s probably a good sign of how strong your kick is ;). It’s very portable and stands up on its own so you could put it wherever you want as long as you don’t miss and break something!

I think it would be a great way to get rid of some stress and anger without damaging anything or anybody. It’s also nice because it won’t try to hit you back so you don’t have to worry about ticking it off ;). It’s also adjustable up to 68″ high so people of all heights can get a kick in.