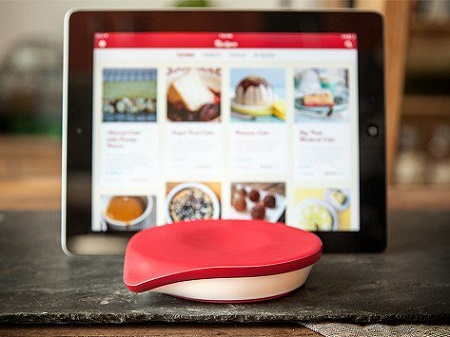 When you want to make a meal from scratch, you know how much preparation it’s going to take. You need to make sure you have all the ingredients at the ready, a few hours to prep and cook everything and of course, a little extra time to do the myriad of dirty dishes at the end. If you wish you could streamline some of this process and improve your cooking skills while you’re at it, then having a personal assistant in the kitchen probably sounds like a wonderful idea.

The Drop is a kitchen scale, but it can do far more than weigh out ingredients. Made of a non-slip silicone, this will give you accurate weighing and works with an app that will track your progress through a recipe. Since it can weigh ingredients precisely up to 6kg and under a gram, you will have no need of measuring cups. You’ll be able to follow the recipe through the app, which will lessen your chances of accidentally adding the same ingredient twice. This connects to iPad mini, iPad mini 2, iPad mini 3, iPad 3rd generation, iPad 4th generation, iPad Air and the iPad Air 2.

This does use a coin cell battery, so you won’t have to bother with recharging it after one day of cooking. There is a capacitive touch button on Drop that works with the app, so you don’t have to worry about trying to poke at your touchscreen while your hands are covered in food. This can be wiped clean easily, and is compact enough that it won’t take up much space in the kitchen. This will cost you $99.95, and could potentially be useful to those that have a hard time following a recipe (especially when it comes to baking).