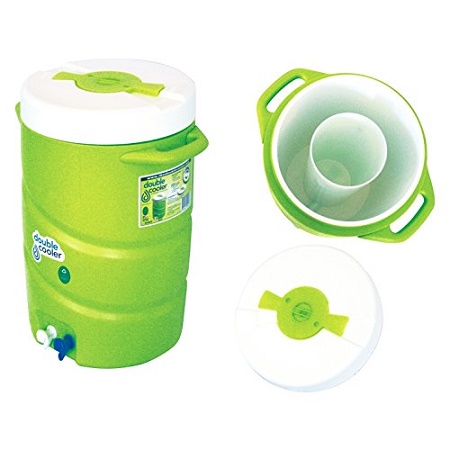 When you’re having a mixer and it’s unbearably hot outside, you need a way to keep your drinks cool so no one drinking lemonade will burn their tongue. We usually pull out a giant cooler that you’d commonly see on a football field, and fill it with ice to keep the contents chilled. However, you’re going to end up with watered down tea, lemonade, or whatever other liquid you might put in there, as ice has a penchant for melting.

If you’d like to keep your guests refreshed with cold drinks without adding a good deal of water to the mix, why not keep the ice separated from the drink? This Double Cooler has a cylinder center for ice, and the area about it that leads to the spout will hold your beverage of choice. It can hold up to five gallons, and will bring down the temperature of your liquid without diluting it from the ice.

When you cap this with the lid, the two compartments will be sealed and separated, not that you should try to pick up and shake this container. It will fit on most truck brackets, which makes it great for those who are out working all day, or are out to play at a tailgating party. This is going to cost you $69.99, and while it can hold five gallons, don’t forget that you’ll be losing two for the ice compartment. That being said, if you’re trying to water a horde of people, this may not be the way to do it.