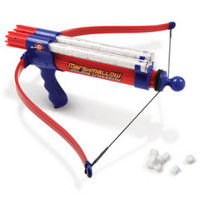 Pillow fights are something that kids would definitely love having at least once in their lifetime, but parents are more often than not against the idea since most pillow fights end up with the pillow getting torn, only to have the room all messed up with feathers and cotton pouring out all over the place. Guess there is a less messy way of settling a bedroom territory dispute now with the $35.95 Double Barreled Marshmallow Crossbow. This double-barreled crossbow will shoot marshmallows up to 30′ in a harmless manner, and its use is not limited to just the bedroom. Using it is a no-brainer – you pull the string back and release, where an attached plunger compresses air in the firing chamber to launch a mini-marshmallow from one barrel at a time. Each magazine can hold up to 25 mini-marshmallows for rapid fire goodness.