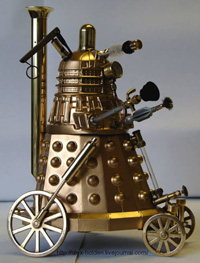 EX-TER-MIN-ATE! If you’ve never watched Dr. Who we apologize for the missed reference, but allow us to give you some background information. The Dalek race is a fictional organism from the popular British sci-fi show which feature a tough tank-like mechanical shell and a tendency to vie for domination of the universe with a piercing electronic scream.

The Dalek’s are quite the celebrity in the UK and internationally among the sci-fi community, even appearing on a postage stamp in 1999. Though the Dalek has become a symbol of British pop culture, we had yet seen a Dalek piece quite like this. Designed by Alex Holden, the Steampunk Dalek is a scaled model of one of the Dalek lifeforms, and is a planned entry to The Great Crystal Cyberdome Exhibition at Orbital 2008 in London.

Originally nothing more than a Dalek bubble bath bottle (yes, apparently they made these quite recently.) In fact, the model is still filled with bubble bath solution since Holden never opened the collectible bottle. The bubble bath bottle itself was spray painted gold, with all of the polished brass attachments held together using a combination of screws, hot melt glue, and cyanoacrylate glue.