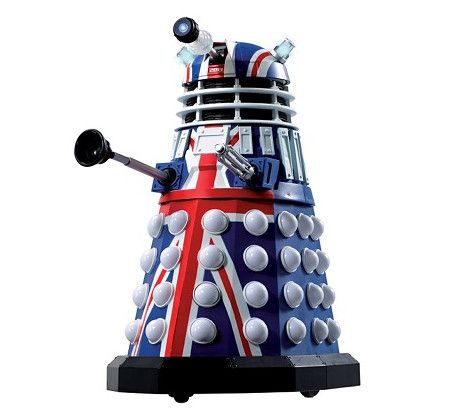 Over the years, we have seen the Doctor Who series roll out a fair number of merchandise that involved Daleks of all kinds – including a Dalek Eye Stalk flashlight, now how would have thought about that? Well, if you happen to be British and have a strong streak of patriotism in you, then chances are you might be more than willing to drop some serious coin – to the tune of $102.95, in fact, for the Doctor Who: 50th Anniversary (British Flag) Dalek.

This uniquely patriotic British Flag printed Dalek will celebrate the Doctor Who 50th Anniversary, and does it in style. In fact, this Dalek will not be static at all, where you will need to come up with your very own sound effects for that added touch of reality. Rather, he is capable of moving around on rather pliable wheels while featuring posable arms, head and eye. Heck, Doctor Who fans who love Daleks in particular will be pleased as punch to hear him spout 8 different Dalek phrases with lights and sound FX. The Doctor Who: 50th Anniversary (British Flag) Dalek will be powered by a quartet of AA batteries, where the 8 Dalek Phrases will comprise of “Seek, Locate, Annihilate”, “Seek, Locate, Destroy”, “You will obey the Daleks, obey, obey!!”, “Halt or you will be Exterminated!”, “You are an enemy of the Daleks!”, “We are the Supreme Beings”, “Exterminate! Exterminate! Exterminate! + Gun SFX” and “Exterminate! + Gun SFX”.