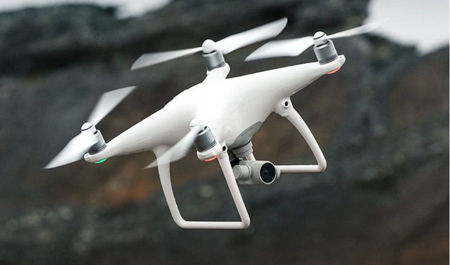 So, you are currently in the market for a drone but do not know just where you would like to start. DJI, the world’s leading maker of unmanned aerial vehicles, might have something to clue you in with their latest release, which will be known as the Phantom 4. What makes the DJI Phantom 4 so special compared to the other drones that are out there in the market? It happens to carry the distinction of being the first consumer quadcopter camera that makes use of highly advanced computer vision and sensing technology in order to ease the task of professional aerial imaging moments.

You can be sure that DJI will draw on its repository of experience when it comes to the Phantom 4, where it will come with a new on-board intelligence that will make piloting and shooting great shots simple thanks to a slew of features such as the Obstacle Sensing System, ActiveTrack and TapFly functionality. The bottom line is, DJI would want even beginners to be able to get the hang of the Phantom 4 in double quick time sans a steep learning curve.

For instance, Phantom 4’s Obstacle Sensing System would sport a couple of forward-facing optical sensors that scan for obstacles and automatically direct the aircraft around the impediment when possible, which in turn reduces the risk of collision, while making sure that flight direction remains constant. Should the system figure out that the craft is unable to go around the obstacle, it will slow to a stop and hover – at least until the user redirects it. It is definitely a very useful feature, as I would loathe to fly this $1,399 machine into a tree or a concrete wall as money does not grow on trees.

The Phantom 4’s camera is still considered as the world’s best aerial-optimized 4K imaging device, where it has been upgraded to include improved optics for better corner sharpness and reduced chromatic aberration. All in all, the Phantom 4 does sound like a winner – any takers?