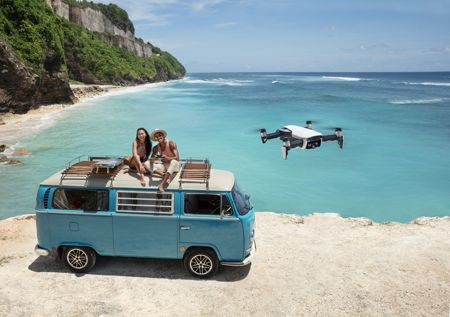 There are many different kinds of drones that are available in the market, ranging from the extremely affordable ones to those that cost more than a decent second hand car. Of course, the latter group would be able to deliver a high level of performance, capturing some really professional looking shots along the way. DJI has long been a staple name when it comes to quality drones, and this time around they decided to push the boundaries of what a drone can do in a small package through the introduction of the Mavic Air. The DJI Mavic Air happens to be an ultra-portable, foldable camera drone that is capable of delivering higher performance, more intelligent features and greater creative possibilities compared to any other consumer drone.

Specially developed for the traveler and outdoor enthusiast, the Mavic Air will boast of the best features that can be found in DJI’s iconic Mavic series, including a 4K camera, new QuickShot modes and SmartCapture for easier, more intelligent photo and video capturing, and FlightAutonomy 2.0 with Advanced Pilot Assistance Systems in order to achieve a smarter and safer flight. Best of all is, it weighs a mere 430 grams, making it the most portable DJI drone to date. With its folding arms and propellers, it is so compact, it is close to that of a modern smartphone when folded.

The Mavic Air comes with a recessed three-axis mechanical gimbal that is suspended from dampeners in order to reduce vibration further, while its 1/2.3″ CMOS sensor is the equivalent of a 24mm F2.8 lens (on a 35mm full frame sensor) to capture high-quality images and videos in 12MP quality. It does smooth stabilized 4K video at 30 fps, and 1080p slow-motion video at 120 fps. There is 8GB of internal memory to help you get started right out of the box, while a microSD memory card slot is there for expansion purposes. A USB-C port makes it a snap to transfer footage and photos out.

Expect to fork out $799 for the Mavic Air, where you can choose from Onyx Black, Arctic White and Flame Red colors.