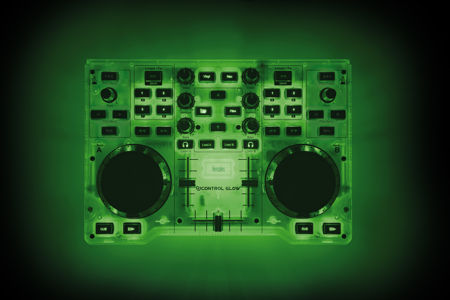 So, when you grow up you want to be a DJ – or your child would want to be one, especially after he or she sees that DJs tend to get the best treatments when they make it big, traveling around like superstars, being invited to the biggest gigs in town, staying at fancy hotel suites, and having a virtually unlimited amount of booze to be inspired by whenever you run a gig. I suppose that is the glamorous bit of it – what happens when you are just starting out? Nobody is going to roll out the red carpet for you, that’s for sure, and you would need to work hard to make a name for yourself. Let’s say that you already have the substance to be on the path to success as a DJ (musically speaking, of course) – now it is time to ramp that up with some style, and Hercules has stepped in by announcing the DJControl Glow.

The DJControl Glow happens to be an affordable DJ controller which will target the budding disc-jockey, and in order to live up to its name, the DJControl Glow happens to be the very first DJ controller in the world that features built-in lighting effects so that it will be able to make the entire deck glow a bright, neon green from within its frame. Thanks to its pair of decks, central mixer, dual jog wheels for navigating within tracks, a cross-fader and two volume faders, the DJControl Glow is definitely simple in operation, and yet prides itself in being the perfect tool for the younger or less experienced DJs out there who would like to hone their craft.

Not only that, the DJControl Glow will enable users to personalize their mix and store for later via the EQ buttons, adding effects, loops, and saving as an audio track that they are able to share with friends. After all, sharing is caring, right? All that users need to kick it off would be to get hold of a PC or Mac that has a free USB port in order to hook up to the controller, have the speakers plugged into the computer and audio files so that they can begin mixing and scratching right from the get go. Weighing slightly more than two pounds also makes it highly portable, with a form factor of 7.5” x 10.4”. The asking price of $79.99 a pop is also not going to break anyone’s budget – which is perfect.