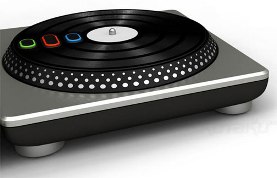 Games like Guitar Hero and RockBand have been sweeping the video game nation, so why not create a musical game based on DJ-ing?

Yes, it would appear that Activision has created DJ Hero, a game that will require a new type of controller that you see here. Not much else is known about DJ Hero except that it will have different genres of music like hip-hop, R&B, Motown, electronica, and dance.

Does anyone think that it is odd that the controller is a turntable with a few “frets” on the record itself? I actually tried out DJing at the Experience Music Project, a museum in downtown Seattle. I realize that doesn’t make me a professional DJer by any means, but I don’t think there should be any buttons on the record album at all.

The only reason why I know about DJ Hero is because someone posted pictures of the controller on a twitter account appropriately named “DJHero”. It is amazing how quickly information spreads on the net.

DJ Hero is due out this fall, but there is no word on a price. We do know that Guitar Hero 5 is also due to be released, as well as a new game called Band Hero. Band Hero is apparently a RockBand or Guitar Hero: World Tour for the younger crowd, with a guitar, drums, bass, and microphone and an E10 rating with family friendly top 40 hits.