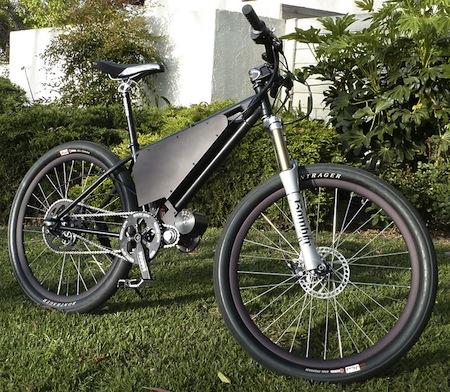 Bicycles are supposed to be a healthy mode of transport to help you get around from one point to the other without emitting any more greenhouse gases than you should, while helping you break a sweat so that you can burn off that Whopper from Burger King you had for lunch earlier in the day. Well, sometimes you might feel too tired to cycle all the way back – which is where an electric bicycle comes in handy, as that particular mode of transport will have a small motor to ferry you across those steep uphill slopes as you take a break.
A designer from Ventura, California, recently came up with his very own home-built electric bicycle that will come with not one, but three power modes. This enables the rider to select from pedal-assist, pure electric motor or standard biking whenever he/she is on the road.
Known as the eCortina v2, this electric bicycle that could will run on a 48 volt lithium polymer battery system, where it ought to deliver up to 15 miles of range although Prince, the inventor, hopes to throw in even more batteries so that the range can be further extended to 23 miles.
Prince also did mention that his eCortina v2 that comes with a 3 speed rear-hub for gear optimization, and radio controlled, brushless magneto-electric motors, will tip the scales at around 60 pounds thereabouts. Despite the weight (and if you take into consideration the rider’s weight as well), the eCortina v2 is able to hit a rather impressive top speed of 45 miles per hour.
The eCortina v2 is for sale at the moment. Too bad there is only one of its kind at the moment, and Prince is still mulling over how much the price of his bicycle is going to be. Do you think he is better off selling his idea to someone who has the resources to churn out the eCortina v2 on a large scale?
Source