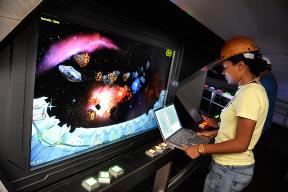 I remember this MAD magazine comic back in the eighties of a father who spends lots of money to get into Disney World, and his kids don’t seem to be interested in the rides. They are interested in the video arcade, and the last panel is the father sulking, probably thinking: “I could have just taken the kids to the arcade and saved so much money”.

Disney World has now figured out a better way to have their spectators play video games. They put them in the line at Space Mountain. Apparently, Space Mountain roller coaster has a reputation of being the ride with the slowest line. The cars aren’t designed with a conveyor belt system so passengers can just be loaded up while the cars are in motion.

As a result, spectators get very impatient in line. These video games are programmed to last about 90 seconds, and these games can accommodate 86 players at one time. I’m not certain if all 86 players are playing against each other, but it does look like a pretty cool game on the giant display.

It doesn’t look like the video games are too complicated. It reminds me of the Mission: Space ride at Epcot, where the spectators have to push certain buttons to go further in the ride. Not that the ride won’t go on if you don’t push the buttons, but it just creates a more interactive feel.

Perhaps all rides at Disney theme parks will have some sort of thing to to while waiting. Of course, we do have mobile device so keep us entertained, don’t we?