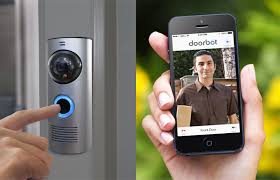 Okay, I admit it, I’m a hider. My doorbell rings, and I run into my closet, which gives a perfect view of my front steps, allowing me to make a decision as to whether or not I will answer the door. I usually don’t, but only because, if I wanted to see you, I would have known you were coming. I have to say that running into the closet is pretty inconvenient and it makes me feel a bit ridiculous, hiding in my own house.

Well, once again, technology answers my prayers. Check out the Doorbot… enabling you to see who’s standing at your front door, and even be able to communicate with them over audio. Your visitors simply ring your bell, and WiFi sends the voice and video to your iOS, or Android smartphone.

DoorBot installs easily enough and can be hardwired where your old doorbell used to be, or it can even run on an internal battery that only needs to be recharged once a year. The camera uses LED technology and you will even be able to see the folks who come to ring your bell after dark. DoorBot is also compatible with Lockitron, which lets you lock/unlock the door’s deadbolt with another smartphone application.

Compatible with iPhone, iPad and Android devices, DoorBot will run you under 200 bucks, and is available for pre-order through Amazon.com, or at select retail stores…So much more dignified than running to the closet,don’t you think?