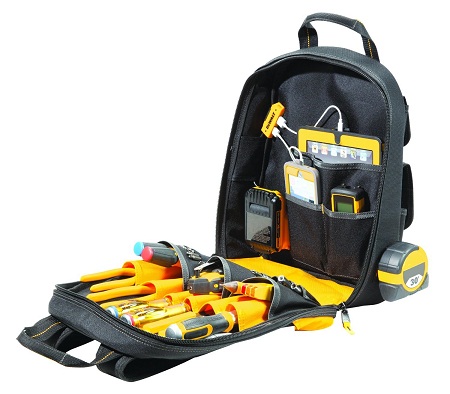 It’s easy to forget that the Internet and technology have basically taken over the world. We’re learning and doing things at speeds that people couldn’t have imagined 20 years ago. That being said, most people have moved their jobs that were traditionally in brick and mortar stores to online shops. However, there are some jobs such as construction, that don’t have that kind of luxury.

Of course, just because manual labor jobs aren’t able to do their work from the Internet doesn’t mean they aren’t using it to their advantage. If you are a tradesman, maintenance or repair technician, DIYer, or general laborer who works with tools, then this Dewalt Work Gear Pack is going to be your new best friend. It’s basically a commuter backpack for your phone, tablet, and camera, but with 23 slots for tools, and a power bank to make sure your phone can keep going throughout the day.

Not only does this battery have cut-off protection so you don’t unnecessarily suck up power, but the internal charging compartment will let you charge two devices at once. There are three versions of this bag, with this one starting the price point at around $65. The larger 57-pocketed backpack with lights will cost around $93, while the lighted technicians bag that has 28 pockets and base pad feet so it will sit comfortably on the ground without crumpling over under its own weight only costs around $48.