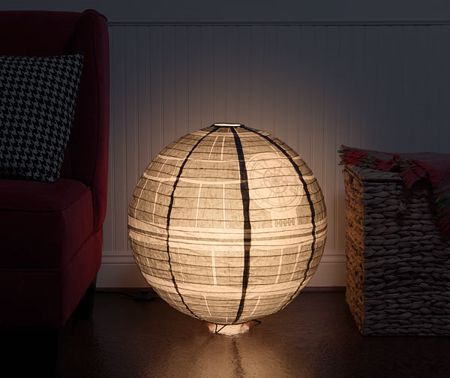 The massive Death Star, a floating weapon of mass destruction, is a symbol of awe and power for those who lived during the rule of the tyrant Emperor Palpatine. It has also proven itself worthy to incarnate into various merchandise over the years, including an inflatable ball which will at best, knock down a poorly constructed sand castle, but this time around we have something that is way weaker in terms of its structural integrity – that of the $39.99 Death Star Giant Paper Lantern.

This Death Star Giant Paper Lantern will still be able to induce a sense of awe and wonder, although it will have more to do with the lighting and ambiance that it creates than a sheer powerful laser that can destroy an entire planet with but a single blast. This 24″ sphere floor lamp comes with an in-line on/off foot toggle (too bad one cannot use the Force to manipulate it), and happens to be a ThinkGeek exclusive as well as an officially licensed piece of Star Wars merchandise. Some assembly is required, where it uses a 40 Watt max incandescent or 13-watt CFL bulb with standard base. You’d best not let any cats get near this, or it would most probably end up in tatters.