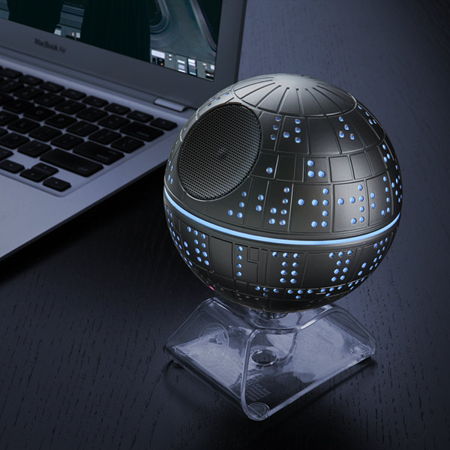 There is nothing more terrifying than the sight of a Death Star looming from a distance, and as you see the rays start to gather around the parabolic dish prior to dealing a death blow to any planet – hence its name. Unfortunately, both Death Stars that were destroyed in the original Star Wars trilogy seemed to suffer from basic engineering problems – that of not being equipped to handle an attack by tiny spacefighters. Well, here is a different take on the classic Death Star, as it comes in the form of the $59.95 Death Star Bluetooth Speaker.

This is basically a Death Star that is placed on an acrylic stand when you first take a look at it, but upon closer inspection, it does more than sit pretty on your desk. In fact, it comes with the ability not to destroy planets, but rather, to fill up the space at that point in time by wirelessly streaming music within a 30 foot radius. Heck, the entire speaker lights up when it is in use, which means it is best used in the dark – where you can see the various details of the Death Star Bluetooth Speaker glow, as though it is about to announce the impending obliteration of another planet not too far away. This is an officially licensed Star Wars merchandise, and it will play nice with Bluetooth 1.1, 1.2, 2.0, and 2.1+EDR enabled devices. Not as educational as the Death Star Planetarium, but equally cool.