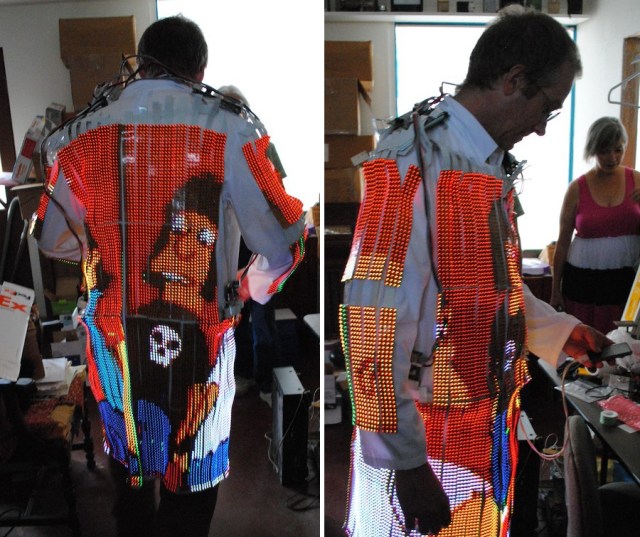 I’ve seen attempts at mixing displays with clothing before, and they usually end up being a stiff screen on loose clothing.

Yeah, it isn’t really a good fit, but Dave Forbes has created a 160 x 120 LED video coat that somehow plays video all over. You can watch a video of it after the jump, and you can see how it works.
You can see that it is pretty DIY, and is essentially circuit boards and LED flex boards hot glued to a lab coat material. The video feed stems from the iPod, and you can see that there are knobs for adjusting the color, brightness, and even a way of toggling it to black and white.
Dave Forbes plans on wearing this coat at Burning Man in the summer. He will have to change the batteries every hour or so, though.

I’m not certain what Dave Forbes’ long term plan is with this lab coat television. In all honesty, I don’t see a practical need for clothes that work as a video screen. Unless one wants to be a walking television commercial at a convention or something.

Still, you have to admire the neat factor of something like this. I’m guessing that you could not sit down in it unless you want to break it. Something tells me that once we get to the age of flexible displays, we’ll be seeing much more durable examples of TV clothing.