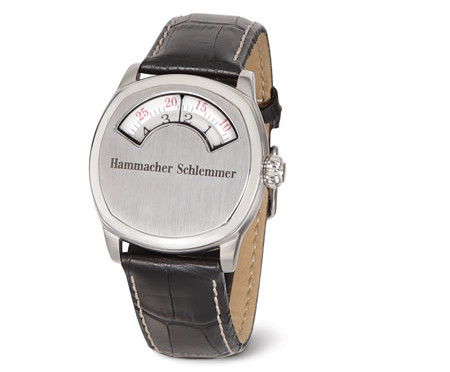 Telling the time used to be a simple process – all that you needed to do was to take a pocket watch from our, er, pocket (where else?) and see what the two hands tell you – and as time progressed, we have moved on to wristwatches, be they of the analogue or digital varieties. Having said that, the watch pretty much remained the same in terms of time telling design for many years, but it looks as though the folks over at Hammacher have come up with a creative method of telling just what time it is – with the $149.95 Dashboard Watch, of course.

Ford might have unveiled an earth-friendly dashboard more than half a decade ago, but this particular timepiece happens to bring an aspect of the dashboard to your wrist. This particular timepiece will tell the time in a windowed gauge which is reminiscent of a 1930s automobile dashboard, and needless to say, this is a Hammacher Schlemmer exclusive. It will be similar in nature to the instruments on classic roadsters such as the Cadillac LaSalle and the Hudson Great Eight, where the watch’s arcing aperture will point to a couple of overlapping dials with large numerals. There is the top row that demarcates the minute while the bottom row tracks the hour; whereas the presence of a central vertical line will point to the current time.