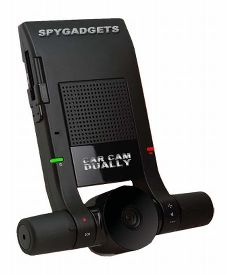 I have seen a lot of cameras that are made to record the action outside the car. I honestly can’t think of any reason to have one of these unless you happen to get in a lot of accidents, and you don’t want your insurance rates to go up any more than they already are.

The major difference between the Dash Cam Dually and regular car cameras is that you get two cameras. Most cameras only show the action outside of the car, but this one has a second camera to show the inside of the car.

In addition to these 1.3 Megapixel cameras, it also has four infrared LEDs to illuminate the inside of the video for proper filming. It also has a G-Shock sensor that displays five level settings that can record the impact points. So if you have an accident, it will record the impact, along with a GPS receiver to log the exact location, speed, and direction.

All this information is recorded upon an SD card, so you can easily view it later on anything that reads an SD card.

You should be able to purchase the Dash Cam Dually off of the Spy Gadgets website for a price of about $385.00.