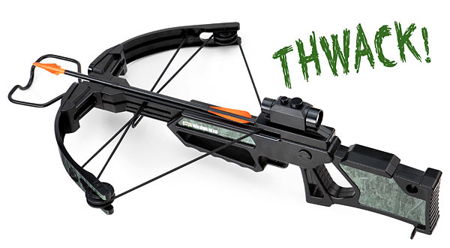 While we have seen our fair share of crossbows, or at least crossbows that do not fire deadly arrows in the direction of the target, there is always room for one more. In fact, it would be one of the more famous crossbows in the history of TV series, and we are referring to Daryl’s Crossbow from the Walking Dead series. Sure, Halloween might still be some ways off, but if you are on the lookout for a Walking Dead roleplay weapon, then you would be on target (pardon the pun) with this $34.99 purchase.

Being an officially licensed The Walking Dead merchandise, Daryl’s Crossbow is not the real deal, but rather, a plastic prop replica which would then explain the price, of course. Arrows are pretty useful in the post-apocalyptic situation against zombies, since it flies straight and true, not to mention can be reused as many times as possible without having to search for new arrows all the time. The arrow included with Daryl’s Crossbow will feature an orange tip for safety, and when pulled, the trigger activates sound and vibration (force feedback action).