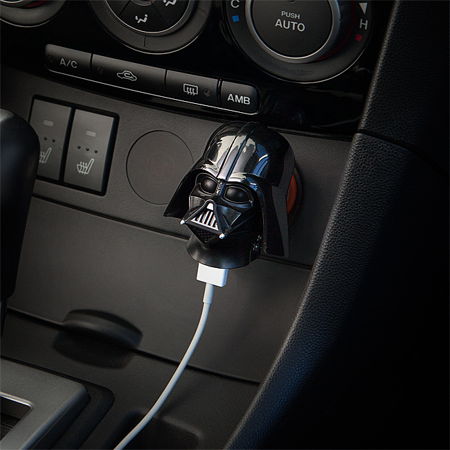 You know for sure that the Dark Lord of the Sith is one bad guy who turned good in the end. All right, so he was originally good before he was corrupted by the power of the Dark Side of the Force. That aside, he was pretty cool and powerful, until he lost in a lightsaber duel with his previous master, who lopped off just about all of his limbs due to his own overconfidence. Well, fitted with robotic parts, he ended up looking far more menacing than even before, complete with his signature machine-assisted heavy breathing. You might want to carry a little bit of Darth Vader coolness with the $19.99 Darth Vader USB Car Charger, as it is sure to make your TIE Fighter, er, car more cool.

All that you need to do is to plug it into your 12V vehicle power adapter (aka cigarette lighter), and you’re good to go. It will play nice with just about anything else that charges via USB, and this is a surefire way to kickstart a conversation with family and friends who share a ride with you. A ThinkGeek creation and exclusive, you can also settle for the lesser authoritative looking model of a Stormtrooper if you so happen to identify more with the grassroots within the Empire.