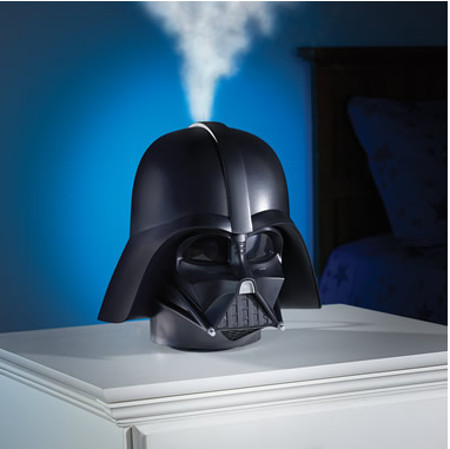 So, the Dark Lord of the Sith himself is known as a cold and calculated person, being a meld between metal and human flesh. His timed, heavy breathing and menacing mask makes him an extremely imposing figure. However, do remember that he once fell in love with a princess, knocked her up, but never really managed to bond with his twin children, which could be why he was so ruthless without having a soft spot for those close to him. Well, Darth Vader plays a very different role this time around as the $99.95 Darth Vader Humidifier.

This tabletop version of Darth Vader will not rely on the power of the force in order to remedy room dryness, as it comes with a humidifier that is integrated into his helmeted head. Being a Hammacher Schlemmer exclusive, this stoic Sith Lord makes use of ultrasonic technology rather than that of the Force to dispense a gentle soothing mist. His armored body hides a half gallon water tank which should be able to humidify a room for up to a dozen hours thanks to 10 moisture settings, while there is also an auto-off function for added safety.