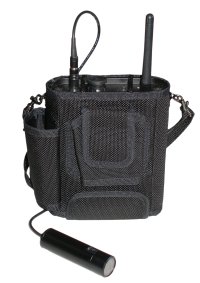 Darim Vision has released its latest wearable/portable security camera – the PVE400 portable video encoder/streamer that is able to hold its own in virtually any environment you pit yourself into (assuming you’re the everyday Joe type who doesn’t go indulge in death-defying environments each week, of course). The PVE400 is meant to provide the wearer with black-box-type archiving to its wireless/IP transmission of video, audio, and GPS tracking capabilities. This is one of the latest generation PVE that brings together simultaneous Wi-Fi streaming and local recording onto a flash memory card without restricting users to either-or choices.

There are many situations where real-time broadcasting for “point-of-view” situational awareness is critical, and these include surveillance to inspection under extreme conditions. Unfortunately at this point in time, current networks aren’t 100% reliable and failsafe, so merging both local recording with simultaneous wireless transmission helps offer an extra layer of redundancy alongside the peace of mind that the entire event can be documented. According to Aaron Taylor, Sales & Marketing Manager of Darim, “Local recording capability provides that important second opportunity to view the action. Like a black box, this capability provides a permanent archive of what happened. Power can go down, networks can fail, but local recording will continue.”

This recording redundancy turns the PVE400 into a “must-have” tool for those who want real-time monitoring as well as others who find themselves in situations where archiving is mandatory. The PVE400 was constructed to be rugged enough to withstand harsh conditions, and is currently being used worldwide by the military, SWAT teams, and special-event security. It has also seen action in remote surveillance applications such as airport, oil rig, and mining inspection operations, so for the average user like you and I, we can be sure that it is able to withstand the everyday rigors we subject it to.