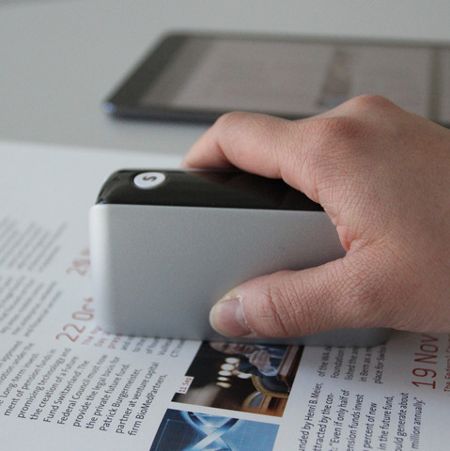 While we have seen how popular wireless speakers have become over the years, do spare a thought when it comes to scanners. Most of us would not give two hoots about a scanner, really, since there isn’t too much to deal with here – just pop in a particular page, and let the scanner get to work, right? Well, perhaps what you see here might change your perspective as well as viewpoint on what a scanner is all about. I am referring to the Dacuda PocketScan wireless scanner, where it has been touted to be the world’s smallest wireless scanner available to users regardless of where they are on the globe. Basically, you can pick up the limited Kickstarter edition of PocketScan at a promotional price point of $99 – but when the calendar bids adieu to July 19, then the sticker price would touch the $169 mark.

This will be a public launch that will follow PocketScan’s Kickstarter campaign, which was a huge success by itself as it managed to surpass the $50,000 mark by raising a cool $542,732 in June last year, which have resulted in it being one of the most successful projects in Kickstarter’s history back then. Needless to say, Dacuda has taken all of that money and put it to good use, completing the trust in the campaign by contributors, and have shipped PocketScans to thousands of backers worldwide. In fact, the PocketScan worked so well, close to 90% of all users would actually recommend it to their friends.

The possibilities are virtually endless when it comes to what the PocketScan is capable of – imagine scanning and personalizing favorite recipes, or how about having text in foreign languages being translated easily and read out loud? Oh yeah, antique pictures that are all yellow on the sides can be preserved for all posterity too, even if those are too big for traditional scanners, they can easily be cataloged and treasured.