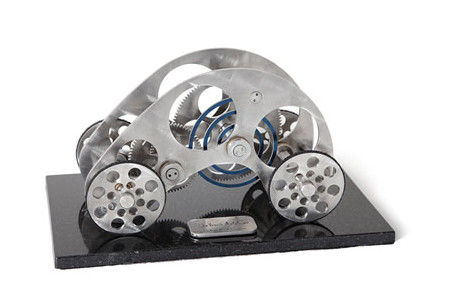 Everyone knows of Leonardo da Vinci – the brilliant thinker who has come up with a whole lot of ideas and actual products that work, not to mention being a true master with the brush as arguably his most famous work, the Mona Lisa, continues to puzzle and inspire people even until today. Well, what we have here is a little bit of da Vinci magic which you can bring home, in the form of the $799.95 Da Vinci Auto Coach, which was inspired by Leonardo da Vinci’s sketches from 1478 of a self propelled car.

This would be different in a sense, since it is a working auto coach that will pay homage to the polymath’s original design. It has long been considered as the ancestor of the modern car, where da Vinci’s concept mobile moved about using coiled springs which were wound by pulling the vehicle backwards. Similar to its inspiration, the da Vinci auto coach will feature coils that are attached to the rear wheels, and you wind those up by pulling the car backwards. Upon release, the energy will be transferred to the clock-like spur gears in order to drive the auto coach forward for several feet. The entire shebang is made up of 1/8″-thick, laser-cut stainless steel and brass bearings which will be able to generate smooth, elegant movement of the gears, axles, and wheels.