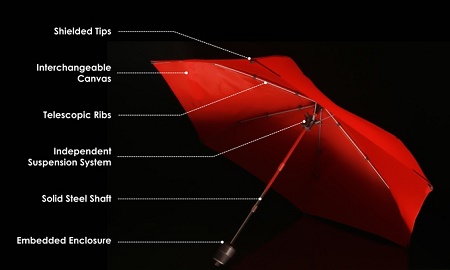 After a big storm with strong winds and heavy rain, you can bet your sweet buns that more than a handful of umbrellas will have been destroyed. Whether the hinges are wrecked or it flips inside out completely from the wind, you’re likely going to be in the market for a new umbrella. We all normally want something compact and convenient, but we don’t often pay much attention to the structure, which is why we’re looking for a new one more often than we should be.

While we’ve seen some pretty great innovations for umbrellas here and there, finding one that is small enough to fit in our bags is the next hardest part. The Cypress Umbrella is certainly the first of its kind, as it has a fully telescopic structure, interchangeable canvases, an independent suspension system, and a drip-free concealed handle enclosure. The tips of the frame that jut out from the canvas are shielded so there’s not as much worry about jabbing out an unsuspecting eye. Best of all, it weighs next to nothing at .65 pounds and collapses down to fit in your bag of holding with your other gadgets and gear.

Each rib of the umbrella is comprised of tubular sections with machined joints and stainless steel pins. This structure is said to make it ten times stronger than its traditional counterparts. The suspension system works similarly to how shocks on your car work, so the only thing you’ll have to worry about being destroyed is the canvas, which is easy to swap out. Paying $59 will get you the Cypress with 2 canvases, or you can pay $139 to get the previously mentioned deal as well as a classic version that is at a fixed length. The classic version doesn’t have a handle enclosure, but it looks a great deal classier with its curved wooden handle. If this can do the task as intended, you’ll hopefully never have to buy another umbrella again.