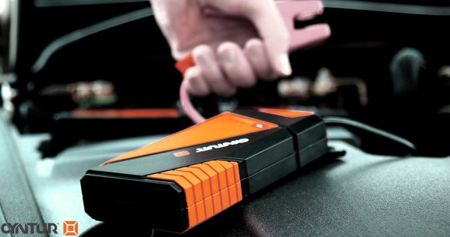 You might not have heard of the name Cyntur before, but perhaps all of that will change once you are done with this particular story. Cyntur is known for being a manufacturer of advanced automotive solutions that will cater for the modern driver, and they are more than happy to announce the availability of its JumperPack mini. Just what is the Cyntur JumperPack mini all about? It happens to be a portable and lightweight device, tipping the scales at less than a pound, while sporting a 12,000mAh lithium-Ion battery within which packs more than enough wallop to jump start cars with up to eight cylinder engines, now how about that for its performance?

Not only that, the Cyntur JumperPack mini will also be able to double up as a portable charging station that will cater for a slew of today’s mobile devices which are essentially juiced up through a USB port of one sort or another. Surely having a device like the Cyntur JumperPack mini is handy in all situations, and the asking price of $99.99 a pop is not too much actually, especially if you were to take into consideration the charges slapped on you if you were to have someone deliver a fresh battery to your stranded vehicle – especially when you are out in the middle of nowhere or it is late at night already.

With the JumperPack mini, it is more than capable of jump starting the likes of cars, trucks, SUVs, boats, snowmobiles and more up to 25 times in a row after a single charge. Not only that, just charging it up once to the maximum should be able to see it last an entire year, allowing you to stash the JumperPack mini away in most glove compartments so that it is ready to rock and roll whenever required.