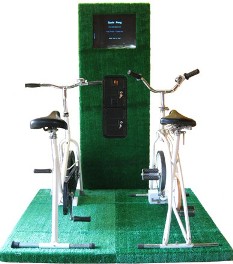 I haven’t been into Pong since the seventies, but if I ever wanted to play it now, I would definitely use the Cyclepong 2.0.

The players work the paddles by pedaling forward to go up, and backward to go down. In all honesty, I’m not certain how much exercise you can get from this. After all, it’s not like the players are continuously pedaling, and studies have shown that you have to get pretty worked up in order to lose weight. However, people who really get into their video games could find the Cyclepong 2.0 to be an advanced version of WiiSports.

I suppose that if the creators of this game could hook up Pong controllers to bikes, they could do that to other games too. I’m thinking that any Atari 2600 game which used the paddle controllers is fair game.

Hey, how about Tetris? Pedaling forward could bring your piece down fast, and back pedaling could slow it down. As for the left and right movements, you’d probably have to incorporate the handlebars.