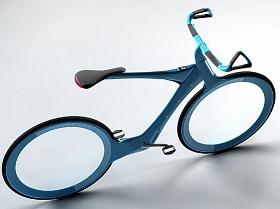 What you seeing here is not a training bike for the Lightcycles of Tron, but a possible design for bicycles of the future. Designed by Chris Boardman, who is an Olympic cyclist, he has added a lot of tech to what was once a human-powered endeavor.

In fact, it appears that this future bike (which does not have a fancy name as yet) has a solar powered motor, so that uphill climb isn’t as hard as it used to be. It can also “play music”, and one can only assume that it has some sort of MP3 Player built-in, or something.

Did I mention a calorie counter? The bike has it, as well as a fingerprint recognition so that only the real rider can ride it. I suppose the theory is that a crook won’t steal a bike that he or she cannot ride. By the way, the whole bike is made of carbon fiber, and the tires are puncture-proof.

Of course, this bike is merely a concept now, but Boardman believes that it will be ready in 20 years. Personally, I’m thinking that it will probably take that long, because I just can’t see how you could fit all those features in the picture that you see here.